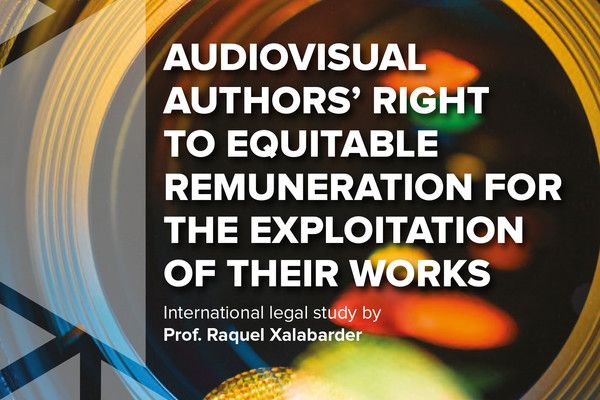 May 14th, 2018 – Organisations representing authors in the audiovisual sector today welcomed a new global study calling for legal reforms to help screenwriters and directors earn royalties for the use of their works.

As filmmakers gather at the Cannes International Film Festival, leading screenwriters and directors are supporting the call - highlighted by the study - for audiovisual authors to have a guaranteed right of equitable remuneration when their works are used by digital services and other users.

In many countries, these creators do not have this right enshrined in the law and so are unable to share in the commercial success of their films and TV programmes.  Instead they often have to sign over their rights to producers with whom they have little or no power to negotiate.

Commissioned by the International Confederation of Societies of Authors and Composers (CISAC) and Writers & Directors Worldwide (W&DW), this new international legal study is the first-ever comprehensive examination of global legislation to support reforms bringing fair payment to audiovisual authors. It is supported by the Society of Audiovisual Authors (SAA), which is leading efforts to amend EU legislation, bolstered by a declaration by 126 prominent screenwriters and directors across Europe and supported by an online petition signed by over 15,000 people from more than 100 countries.

The complete study, as well as a 6-page summary, are made available today.

Written by copyright law specialist and Universitat Oberta de Catalunya Intellectual Property Chair Professor, Raquel Xalabarder, the study recommends an international legal framework for introducing an unwaivable and inalienable remuneration right for audiovisual authors.  This would benefit all parties without impinging on the commercial exploitation by the producer. The framework proposed complies with international and EU copyright obligations.

The new study provides a clear legislative blueprint for decision makers to ensure all audiovisual authors benefit equally, regardless of their country of origin or of audiovisual production.

Jia Zhang-ke, filmmaker whose film “Ash is purest White” competes for the Palme d’Or and CISAC Vice President said: "It is a matter of fairness. We need legal mechanisms that allow filmmakers and screenwriters to be compensated for the multiples uses of their works. This is truly necessary in the current digital ecosystem in which our works have the amazing potential to reach audiences around the world in the most direct way but for which we do not get fairly compensated.”

Julie Bertuccelli, film director and SAA patron said: “It is a true pleasure as a director to see my films being shown around the world. However, in order to make a living from my art, my collective management society must be able to represent my rights and negotiate remunerations with those exploiting my works, including video-on-demand platforms.”

W&DW President, Horacio Maldonado, said: “Audiovisual creators should no longer be deprived of their rights. Cultural diversity is at stake: at a time when growing market concentration means media giants often control the audiovisual landscape and broadcasting circuits, it is essential creators are given proper bargaining tools that enable them to continue making their voices heard, sharing their stories worldwide for generations to come.”

For 6-page summary of the study go here.